I didn’t want her to go.

Last week, the medications that were keeping her comfortable, keeping her eating, began to fail. As the week progressed, she declined. I noticed small changes which represented a much larger faltering in Jenna’s ability to live a full life. Typically I come home from work and have two elderly dogs trotting down the dirt road to greet me and shave thirty seconds off our time apart: Mulder steadily trotting sideways with a broken tail held off to his side, Jenna delightfully trotting along with her proud tail swinging. Then last week, I noticed that only my side-trotter made his way to me. I’d get out of my truck and find Jenna laid out on the cool concrete in front of our home, or inside sleeping on her pile of blankets. She had to be encouraged to go outside and to come back in. Strange for a dog who prefers everything the outdoors has to offer. I also noticed that Jenna had trouble with her hind end. She was shaky upon standing and walked hesitantly. Our last night together, I noticed she had a rounded abdomen and her appetite dropped. I fed her vanilla ice cream, a marrow bone, and deli turkey. She was only half interested in each offering.

I had plans to go to Boston for the long weekend to celebrate momentous life occasions for two close friends. Given the evening before with Jenna, I felt uncomfortable leaving her with my Dad without some prognosis of her current condition. I dropped her and Mulder off at the vet before work, Mulder for moral support, of course. I also knew that if I had to drive home without Jenna, at least I’d have Mulder to lean on.

The vet called me at work not even two hours later and simply said “It’s time to put Jenna to sleep.” Although I wasn’t caught off guard per se, my breath clogged my airway. My stomach lurched. Tears fell. Fear and anxiety shook me. The vet told me that I could take her home for one more night and bring her back in the morning. The vet also told me that my sweet Jenna had a large liver tumor and that it had ruptured bloody fluid into her abdomen. I didn’t want to prolong Jenna’s suffering and so I said no, let’s do it today, and asked her when. She told me to come in immediately.

I left work in a fog of tears. I slid into a pair of shoes I had earlier kicked off under my desk, and ran out the door mumbling to the receptionist and our paralegals where I was going-they had gathered upon hearing the cries from my office. The words made me sick. I drove safely across town by the grace of whatever God loves me, and because I forced every thought of Jenna out of my mind.

I walked into the vet clinic and the receptionist motioned for me to go into the last waiting room. There was a thick, fleecy layer of blankets underneath Jenna, who laid half on them whiLe Mulder sprawled out on top of them. He always is and always will be completely oblivious to anyone’s needs except his own and sometimes mine. I encouraged Jenna to move onto the blanket and helped her to do so. She did not feel well and I knew that no amount of Denamarin, prednisone, antibiotic or even surgery could make her feel better now. She looked at me with soft eyes. She did not pant. She did not wag her tail. She was stoic and in that stoicism, I knew that she was ready to leave. 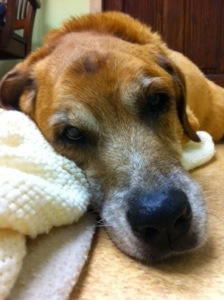 I wanted to give her all the love in the world during those final moments. I hugged and kissed and pet my Jenna, hoping every touch conveyed to her the thirteen years of love in my heart. I tried to concentrate on the good memories I had with her and not the time we spent apart. I thought about the freedom she had and loved during her later years. I hoped she was recalling all of the places she traveled and lived, dogs and crotches she sniffed, animals she chased, carcasses she rolled in, swims in rivers and lakes and the ocean, and mountains she climbed. I lay there with her recalling how much of my life I experienced with her by my side. She was my first dog and boy, did she have to deal with my steep learning curve! However, learn I did, and I grew into an adult with her. We went to law school in Miami. We traveled all over the US and Canada. She flew in an airplane and (regrettably) rode in an airboat. She witnessed my (failed) engagement. I was diagnosed with cancer and she was there to sleep by me when I was home alone, and also to keep me getting out of bed to tend to her needs. When I faced sickening heartbreak she accepted taking backseat to my grief. She was the ultimate companion, asking for me to respect her individuality and provide for her basic needs, and in return she happily lived with me.

I nuzzled my face into her fluffy mane and just breathed her in. I wanted to remember her smell, to make some neuro-connection so that I will always recall her scent. Although she doesn’t get baths very often, I believe the health of her diet, access to exercise and overall happiness created a not-so-stinky dog. I continued to smell her and pet her and couldn’t decide if I wanted the vet to come in to begin the process, or if I wished for her to become caught up in emergencies for the entire afternoon, or perhaps forever. Really, I sat there next to Jenna wanting eternity to become an immediate reality, wishing I spent half my life hugging her, and mourning not only the moment we were in, but the moments I missed being with her.

The vet came in and gave her a sedative. There was no lengthy discussion. Before I knew it, the process had begun. I told the vet I didn’t want a lot of time to pass once Jenna was under anesthetic, that I wanted her to be given the euthanasia shortly thereafter. Due to the massive amount of fluid in her abdomen, the vet gave her twice the normal amount of sedative, to make certain it worked and didn’t all end up sitting in her belly.

Jenna fell asleep for the last time with her head resting softly on my lap, my fingers touching her gray face and rubbing her soft ears.

I placed her head down on the blankets when the vet came back in with the euthanasia. I moved over behind Jenna, petting her with one hand and resting the other on her chest, feeling her heart beat. After the vet administered the euthanasia, I felt her heart continue to beat and then without major consequence or fanfare, I felt it no more, and Jenna was gone. Her nerves continued twitching after her heart stopped. Given her lifelong penchant for following her nose before acknowledging any request of mine, it was quite apropos that her nose whiskers twitched the longest, as if her nose took the lead, navigating her way out of the physical world.

Home is quiet without her. Mulder follows me wherever I go. I put some relics of Jenna away-her pink leash and pink dog bowl. I kept her collar and a picture from her youth on my mantel so she can watch over Mulder and me, and remind us that she’s waiting somewhere down the road.

10 thoughts on “Down the Road”

My Life is a Lifetime Movie

A chicken vet's perspective on the world

"Cowden Syndrome and Lhermitte-duclos Disease are words, not sentences."

Thought Catalog is a digital youth culture magazine dedicated to your stories and ideas.

Loving & Giving...and a few other qualities.

The World of Special Olympics

when you need a break from the world