I became a nervous wreck of a woman days before my final Boston plane ride.   You’d think the fact that cancer was slowly killing me may have hit me a month ago when I first met with the breast surgeon, or the oncologist, or the plastic surgeon, or the fertility specialist, but I am pretty sure that little fact escaped my consciousness until I was counting down the days until takeoff.

I found myself getting mad at Bing for little things that never bothered me before.  His pocket contents are on the kitchen counter (they always are) – grrrr, he must expect me to clean up after him.  The toilet seat is up (he always leaves it up) – oh my God, he totally disrespects me.  In addition to Bing’s new mission to drive me nuts, I felt convinced that my cancer probably spread.  I coughed – it’s matasticized to my lungs.  I felt hot and dizzy (it’s summertime) -it’s turned into a brain tumor.  In my absence, I worried about our chickens’ safety, Dora getting let out of the barn, our dogs fighting, Mulder getting sick, and about my horse’s soundness and happiness.  I worried that the porch lights may be left on, that all of the counters and window sills would collect copious amounts of dust, and that the dog hair wouldn’t be vacuumed.  I convinced myself that life couldn’t really go on without me, and I did not want to leave.  Really, I worried that I may not be the same person when I returned to Colorado.  That I would be weaker, incapacitated, and less whole (and not necessarily just in a physical sense).

I flew to Boston on Bing’s 37th birthday to finalize my cancer ass-kicking plans.  The flight was running a bit late, therefore jetBlue offered all of their movies for free as a courtesy to their patrons.  (FYI, the TV is always free on jetBlue…).  I opted to watch a Kate Hudson movie, assuming that it was a fluffy romantic comedy.  It wasn’t.  I chose the Kate Hudson movie where she is dying from Stage 4 colon cancer.  Seriously.  Some pugnacious part of me dared the Cancer Kitten part of me to watch it, and despite the fact that there wasn’t going to be a happy ending to this little Hollywood number, I did.  Surprisingly,  I think I hid my cancer-positive status from my seat mates.  I only had to switch stations once during the film, and was able to catch my tears with a jetBlue cocktail napkin as soon as they started to spill from the corner of my eyes.

Lesson learned: Don’t watch a movie unless you know the basic plot.

After the movie, I decided to pick up my Nook (one of my awesome cancer presents) and read my newly-downloaded book, “Why I Wore Lipstick to My Mastectomy.”  Again,  I think I hid my cancer-positive status from my seat mates and was able to catch my tears with a (second) jetBlue cocktail napkin as soon as they started to spill from the corner of my eyes.

Lesson learned: Don’t be a dumbass and read a cancer book after watching a cancer movie when you have cancer.

My friend (or sister from another mother) Kristin and her hubby Rob picked me up from the airport.  I found them in the terminal having an appetizer and a beer at Remy’s.  I joined them for a pint, which went down very fast as I told them about my cancer flight and in the same breath, that my drinking days are numbered, as alcohol may increase my chances of having breast cancer again, and nothing is worth that.  With that, I swallowed down the last drop of my beer and headed off to my mom and aunt’s house with a little IPA buzz.

My young cousins, age 9 and 12, made this great welcome sign for me: 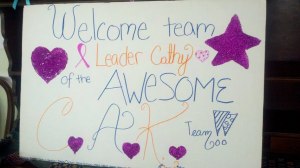 How cute!  (If you don’t recall, CAK stands for Cancer Ass-Kicking).  They also gave me fun, metallic balloons, and some pamper-yourself gifts from Lush and Victorias Secret.  What a nice surprise!  My sister Kim also had a nice surprise for me.  She decided calling me “Cancer Tit” was an appropriate pleasantry.  I told her she can call me “Cancer Tit” until the offending boob was removed the following Tuesday.

On Monday (July 16th), I had an appointment with a radiation oncologist, Dr. Jennifer Bellon, and my breast surgeon, Dr. Carter, to finalize surgery plans.  My sister Kim drove and my mom joined us for these appointments.  This was the first time I met with Dr. Bellon.  She asked me basic background questions and then performed an exam.  I was a bit surprised that the radiation oncologist wanted to be so hands-on, but also appreciated her thoroughness.  Then she told me what she honestly thought.  She said that in her opinion, a lumpectomy may not give me good cosmestic results, and that the radiation may cause difficulties with reconstruction in the future, should I need a mastectomy.  I watched her and tried to listen, swallowing hard a few times to keep my emotions at bay.  This wasn’t exactly what I wanted to hear.

As far as Dr. Bellon’s actual part in my cancer care – the radiation – she told me to consult with her again after surgery once we know my chemo schedule.  If I have a lumpectomy, I will definitely have radiation.  If I have a mastectomy, I may have radiation if the chest wall is involved.  She said I will have small tattoos on my boob where the radiation will be focused, and that there will be skin tighetning and loss of elasticity in the area.  I will have an initial appointment with her to get everything set up, then will come daily for 6 weeks and a radiation technician will administer the therapy.  Sounds dreamy!  My mom and sister were more impressed with the situation than I was, as they found the office’s drink and snack stash, and kept offering me goodies.  When I am in cancer-doctor-visit-mode, it’s hard for me to swallow water, let alone eat.  The stash did not impress me.

I had an appointment with Dr. Carter at 3p, and we had some time to waste after the radiation oncologist.  We cruised around Dana Farber for a bit and my mom had lots to say and questions to ask about the art on the wall, the healing garden, and the cafeteria.  When three o’clock finally rolled around, Dr. Carter was running late.  I sat in the waiting room at the Brigham and Women’s Breast Center, replaying my conversation with the radiation oncologist, fretting that Dr. Carter changed her mind regarding her willingness to perform a lumpectomy.  Luckily, this was not the case.  Dr. Carter was on board for the lumpectomy and said she was comfortable approaching my cancer incrementally.  She told me that there is a 10-15% chance that the margins won’t be clean with a lumpectomy, and that I will require a second surgery.   As far as opening and closing, Dr. Talbot (plastic surgeon) is going to be in surgery to help determine where to make incisions with my boob’s future in mind.  He has to consider future lifts and work to make my boobs match, and also place the incision where it will be encompassed by a mastectomy incision, should I have a recurrence.

I left the hospital happy that I was scheduled for a lumpectomy, but also stressed about my cosmestic results.  I had an appointment with Dr. Talbot scheduled for the 18th, so I knew I needed to relax until I spoke with him, but I still couldn’t stop my mind from wandering.  I wondered if I was going to have to buy all new bras and bathing suits.  I wondered if I would even want to go to the beach in a bathing suit in the future.  Worst of all, I wondered if my new boobs would compel me to start shopping for bathing suits from Lands End.   I shook my head and realized I needed to take the girls to the beach to show them off one last time in a real bikini, just in case.

3 thoughts on “You Can Call Me Cancer Tit ‘Til Tuesday”

My Life is a Lifetime Movie

A chicken vet's perspective on the world

"Cowden Syndrome and Lhermitte-duclos Disease are words, not sentences."

Thought Catalog is a digital youth culture magazine dedicated to your stories and ideas.

Loving & Giving...and a few other qualities.

The World of Special Olympics

when you need a break from the world